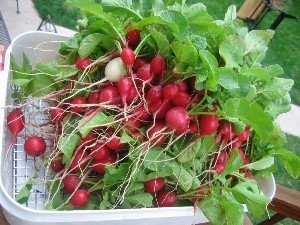 Three Brothers Garden is a community vegetable garden located at 4107 N. Pulaski Rd (at Belle Plaine Ave.) on the northwest side of Chicago. Produce grown in the garden is donated to the Irving Park Community Food Pantry for distribution to its clients. The garden is a partnership between Carlson Community Services and Irving Park Lutheran Church. 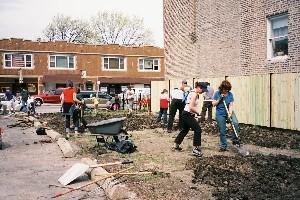 Three Brothers Garden is was founded in 2009 as a community vegetable garden with the goal of benefiting the Irving Park Community Food Pantry, an organization that works to eliminate hunger in the neighborhood. The garden enjoys strong support from neighborhood residents and institutions.

The Irving Park Lutheran Church allowed the use of a vacant lot for the garden site. The garden was designed with the help of a local Illinois Master Gardener. In the spring of 2009, through the help and hard work of many volunteers, the lot was cleared, the soil was turned, 20 raised cedar beds were constructed, and the perimeter was fenced. Soil and seeds were added to the beds.

Three Brothers Garden is the site of various community events such as lectures, book discussions, cooking and canning demonstrations, and potluck suppers. Check back for details on our next event! 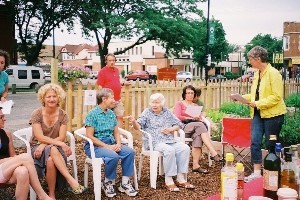 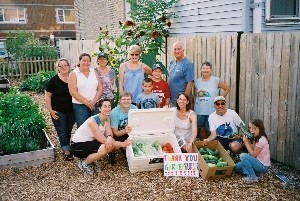 Volunteers show their appreciation for a grant from Gardenburger